I am going to use this page to respond to peoples comments. I will see if I can debunk any silly responses by using what they call “Physical Evidence” to contradict it.

My First is to respond to Prinnie herself who tried to use a fake email or IP address.

I wish to make it known that I never claimed Anonymous was responsible for anything, so Prinnie Please, get that fact right.

This email above was sent to me by this person below.
Take notice to the email name and IP address. 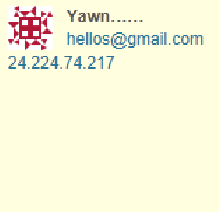 You claim that the timeline is irrelevent because the attack did not start on Steubenville until the 23rd of Dec? This a feeble attempt to hide the “Physical Evidence on the fact” that Cody Saltsman was notified of KnightSecs intentions On *Dec 8th way before you were approached to settle the Suit, roughly 12 Days. The suit was not closed out until a couple days after you were approached by the Saltsmans.

If you follow the timeline back from Dec. 8th you can clearly see a small *Group of People* trying to get the attention of *Anonymous* to do their *Dirty Work* or are you calling Anon123uk a Liar?

In a post made by yourself you say that Saltsman approached you “on or around the 20th of Dec. to discuss droping the the lawsuit” which was 12 DAYs after he was notified of knightSecs intentions by KY on DEC. 8th. —>

Which means that any evidence “prior” to the Saltman’s approaching you to drop the case is “relevant” and can be use against you in a Court of Law.

You claim that Cody was never intimidated prior to droping the lawsuit, *which we proved is a lie* then went onto claim it was the ACLU that intimidated and “scared” the Saltsman’s into dropping the case? Does the ACLU know that your making that accusation?

I do not believe that the ACLU intimidated the Saltsmans at all, in fact the only thing the ACLU can do is help defend you in the case. The ACLU has no power to threaten or Intimidate anyone and that is not their intentions. And from reading your case I see there was a more then good chance of you losing, if the Saltsmans had not dropped it. So you had to come up with another plan?

Just to be sure i will call the ACLU and show them the comment you left and see if they can clarify things. I bet they are going to deny making anyone “scared” and be upset at the fact that someone who they tried to defend “accused” them of such.

If you had so much faith in the ACLU then why didn’t those involved wait until after the hearing and outcome to outsource the operations on Steubenville?

If you read the statement above made by Prinnie herself on her own Blog Site she says specificly that “the Saltsmans aproached them on or around Dec. 20th to have the lawsuit dropped.”

Heres a copy of a tweet above. Which in itself proves Cody was targeted before the Lawsuit was dropped.

Here is more proof that Cody was threatened before the 20th as well. See the date? Dec 12th. 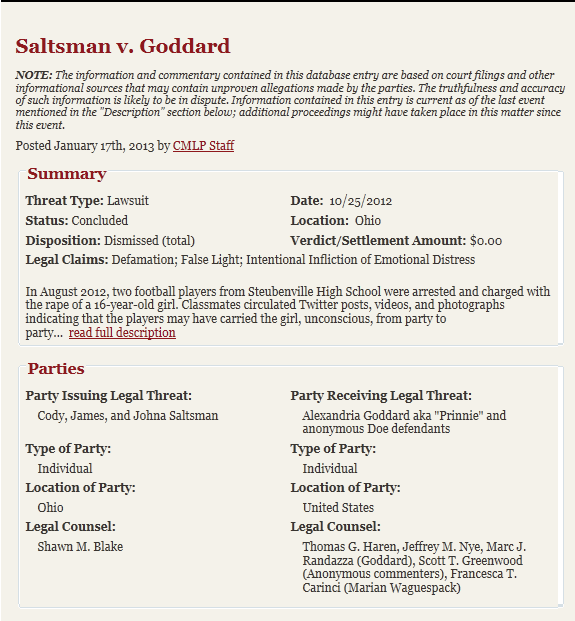 If you notice this set of tweets above you will see that it was Dec 8th that Cody Saltsman was singled out and warned of Knight Secs intentions. If this was not about the lawsuit then why did KY single out Cody Saltsman and not the others that were more involved with the incident? Anyone who has common sense can figure that out. If you want to review this in the timeline the go back to the Questions Left Unanswered page.

This goes out to those who were bored,

Don’t Worry im sure there will be penty of time to be bored in the future.

A good exchange of information is never boring.

Now you can go back to being bored.